I show you how to make a delicious Gomaae salad using some leafy kale and some healthy green spinach. It is served with an incredibly simply sesame dressing that has a lovely nuttiness to it. This dish is popular in Japan, especially in bento boxes as an vegetable side dish, and as an amazing pop in colour!

Gomaae is a great side dish to have in your kitchen repertoire. It’s super simple to make, and because you quickly blanche the spinach, it keeps a lot of the nutrients in it. All you need is some of the leafy greens, sesame seeds, soy sauce, sugar, and a little bit of mirin.

The word Gomaae is actually a combination of two words. Goma means sesame seeds, and ae means to dress in a sauce. So the literally definition is to coat something in sesame sauce. Which for our dish is some simple blanched spinach and some boiled kale.

The sauce is easy to make. The quickest way is to get just grind the sesame seeds, mix it with soy sauce, sugar, mirin, and mix it with the cooked vegetables. But I add the extra step (which I believe is a mandatory step) of roasting the sesame seeds before grinding them, giving the sauce an AMAZING nutty flavour. Seriously, the simple step of pour the seeds on a pan over low heat for 5-10 minutes will bump up the flavour to an 11. But! if you don’t have time to roast the seeds, you can buy pre-roasted sesame seeds at any Asian market.

Not that we have talked about the seeds, I’m going to talk about how to grind them. There are a few ways to do this. The traditional method is using a Japanese pestle and pestle called Suribachi. It has special grooves in it that allows for more even grinding. If you don’t have the Japanese pestle and mortar, and normal one work just fine. The last method would be to use a food processor to slice the seeds into a rough powder.

My personal favourite is the Suribachi for the consistency. The groves create a nice place for the smaller bits to fall into, preventing it from grinding and smaller. This is because I like seeing small bits of sesame seeds on the vegetables to remind me of what is in the dressing. As well as providing a bit of bite to the texture.

A normal pestle and mortar would be my second favourite. The only issue for me is that if I’m not too careful, I could grind the seeds into a fine powder. This means the food processor is in last place. This is because the food processor doesn’t release the oils as well as the other two. The blade only cuts the seeds, whereas the pestle and mortar presses them the extract the oils out.

A normal gomaae would just be spinach and sesame dressing. I added some kale because I wanted to give the salad some more texture. The dark leafy greens give a very nice “chew” to the dish as well as a nice depth in colour when complemented by the bright green spinach.

No matter which method you choose or which vegetable you use. I highly recommend you try this in your next dinner. It is easy to make, and takes very little time, you practically have to reason to say no! 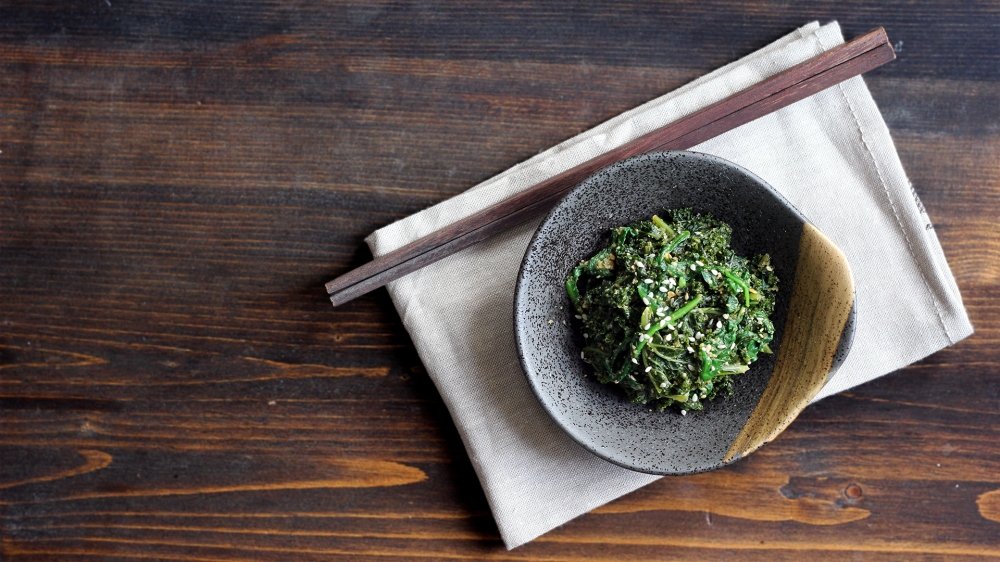 Start with blanching the spinach in a pot of hot water for 30 seconds. Then dunk it into a bowl of cold water to stop the cooking. Keep the hot water for the kale! Once the spinach is cool enough touch, use your hands to take the spinach out and squeeze the water out. You’ll end up with 3 balls of spinach.

Grab your kale, and rip the leaves off the stalks and toss them into the hot water. Simmer for 8 minutes.

While the kale leaves are cooking, lets move onto the sauce. Grab a small pan and roast the sesame seeds over low heat, until they’re golden brown. You should be able to smell a nutty aroma when they’re done.

Pour the roasted sesame into the pestle and mortar and grind them until you get something that looks like fine bread crumbs (refer to the photo above). Scrape the seeds into a bowl, and mix it with the rest of the ingredients. You’ll get a thick brown paste.

Once the kale is ready, repeat the same steps for the spinach. When you have both vegetables squeezed and shaped, give them a rough chop before placing them in a mixing bowl.

Add the sesame dressing, and toss the vegetables with a pair of tongs. You can keep this in the fridge until you’re ready to serve.