Start of the new year with a healthy delicious veggie burger. This awesome black bean patty is made with “seitan” which is a special wheat gluten that gives it a satisfying bite to it. Check out the full video recipe after the break!

Thoughts:
To me this is the best veggie patty I’ve ever eaten, at least in “mouth feel.” A lot of veggie patties I’ve come across are usually very mushy and not very satisfying to bite into.The flavour is usually very good, but the texture usually leaves me wishing I got a regular burger. So this week I thought I go around and see what I can add to the patty to make it a better veggie burger.

The one thing that came to mind was enoki mushrooms. There are a lot of veggie burgers that add mushrooms into them to give them a more “meaty” taste and texture. I thought this would be perfect for me since enoki is super chewy when cooked. So I cut a bunch into small pieces and mixed them into my black bean patty recipe. The results were a little disappointing. The burger was still mushy, but this time with a little bit of mushroom flavour.

So I went back to the drawing board. I did some research and found something called “seitan” or wheat gluten. It’s a food made from the main protein of wheat which is gluten. The way they make it is by mixing water and wheat together into a dough, and then wash it until all the starch is gone. What you’re left is a sticky insoluble gluten that is super elastic when cooked.

Which is pretty much exactly what I was looking for. My first attempt was just to cut the gluten into bread crumbs and replace the actual bread crumbs that I usually use. It turned out alright, but the texture was barely noticeable, and the patty was more delicate than before.

This was probably because there is too much water content in the burger, so my next attempt was to dry out the gluten bread crumbs by toasting them on a pan over medium low heat before adding them to the patty. The results was exactly what I was looking for. The toasted crumbs gave it a satisfying chew without affecting the taste of the black beans and spices.

One thing to note is that there are many different forms of “seitan” depending on the company and the area it is from. I got mine from an Asian market and it is for Chinese cuisine. The other ones will probably work but you might have to fiddle with the ratios.

Since this recipe uses eggs it isn’t actually a true veggie burger, but if  you scroll down to the recipe you’ll find some egg replacement you can use instead.

I hope you give this a try, and if you have any comments, or suggestions, or anything else please leave it here or over at the YouTube video. 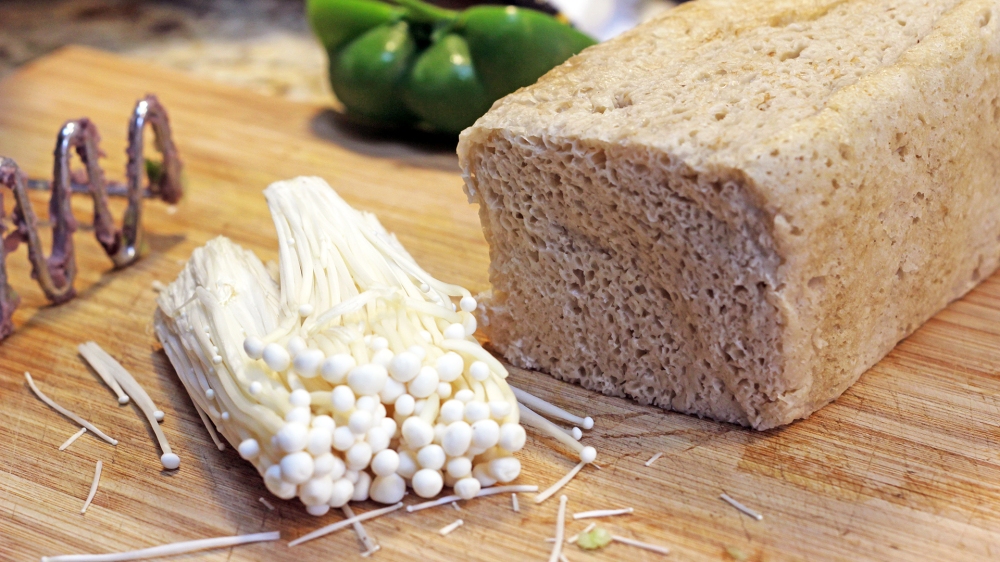 Directions:
Dump the can of black beans onto a colander and give them a good rinse. Set aside so it can drain and dry. Next dice up the green peppers and onions and saute them over medium heat until they’re soften. Add the garlic in the last 30 seconds before blending them up in a food processor. Scoop out the paste and set aside in a bowl.

Grab the wheat gluten and cut them into small 1 inch cubes. This will make it easier to blitz up into bread crumbs. Toast the gluten over medium low heat until they’re dry and golden brown.

Now to mix everything together. First mash up the beans with a fork or potato masher. You will want to spend a good time on this as the more mashed it is the better it will keep it’s shape.

Finally toss in the toasted gluten bread crumbs and give that a final mix. Let the mixture sit for at least 30 minutes so that the gluten can soak up the liquid.

Bake in a preheated 375F oven for 10-15 minutes or until golden brown. Serve with your favourite toppings.