My take on the every popular dessert creme caramel (or flan)! While the little vanilla seeds doesn’t provide the nicest of presentation, it makes up for it in amazing flavour that’s hard to beat with regular extract. The video recipe is after the break.

Note:
You can replace the vanilla bean with 1 tsp vanilla extract

Directions:
Pre-heat the oven to 325F

Butter four ramekins, and place them into a small pan. Grab the 1/2 cup of sugar and dump it into a thick dry saute pan. I didn’t have one at the time so I had to use a non-stick pan (which also works, but a saute pan provides better heat distribution). Place the pan over medium heat, and swirl pan until everything is melted. Be very careful not to burn yourself on the caramel, you’re pretty much handling lava here. After the sugar has melted, evenly distribute it into the ramekins, and set aside.

In a bowl, add the egg, egg yolks, 1/4 cup sugar, the seeds of 1 vanilla bean and a pinch of salt. Whisk until it is frothy. Pour in the milk and cream and stir until it’s incorporated. With a ladle divide the mixture evenly in each ramekin. Place the pan into the oven, and pour hot water into it until the water is halfway up the ramekins. Bake for 45 – 50 minutes or until there is a slight jiggle in the centre when you shake the ramekins.

Let them cool for 15 minutes before taking them out of the containers. With a sharp paring knife carefully separate the sides of the creme caramel. You’ll know it’s loose when the caramel comes out the sides and you can move the creme around. Place a plate on top of the ramekin, and quickly flip it over. Remove the ramekin and chill in the fridge for at least 1 hour. Another way is to leave them in the containers, and chill them first before taking them out. This works fine, but you will have to dip the container in some hot water to for 20 seconds before flipping them over to get a smooth release. 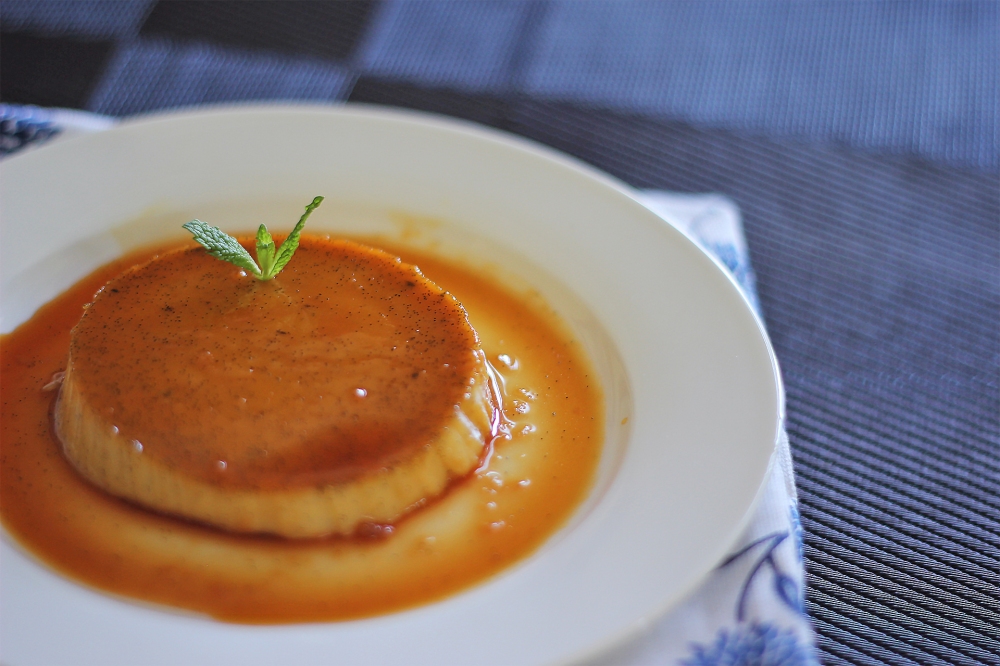 Thoughts:
I have seen this dessert many times in anime. It’s always the thing everyone loves and if there is one left in the fridge, there is usually a fight over it. I only tried it once in my life when I saw a packaged one at T&T. It was alright, though I thought the caramel flavour was really strong. I didn’t think much of the dish and left it at the back of my mind for a long time.

It wasn’t until I got a bunch of vanilla beans from a friend did I start thinking of making creme caramel. I rarely used the actual beans, so I wanted to make something where you can really taste the vanilla flavour. A few dishes came to mind, but the idea of having it in a elegant dessert like a creme caramel trumped them.

The interesting thing about this dish is that it originated in Rome. I always thought that with a name like creme caramel or flan it would be from France. I mean their desserts are always amazing and elegant, so of course it would come from there right? While the dish is very popular there, the origins of this dessert is from the Romans who, interestingly, ate it with savoury dishes such as eels and peppers. Weird eh?

After some trial and error, my final product is the one you see in the video. But I saved the actual vanilla bean for the video, so I wasn’t exactly sure how it would look like at the end. When I saw the finished product, I was surprised that it had so many black dots in it. I knew there was going to be some, but I hoped a lot of it would be on the inside or that there would only be a few. But while editing the photo, I have come to really like the look of it. It has this rustic elegance to it.

I highly recommend you try this at home if you have any comments, tips, or suggestions please leave it below or in the video. I would love to hear from you!